It’s officially been one year since the SEP owl mascot was introduced. At the time, our little feathery friend didn’t even have a name! Since the introduction on day 1 of moving into SEP’s Forever Home, Hexter was named and has been used in over 40 DIFFERENT WAYS. That’s pretty incredible. For a quick recap here’s a video I made a month ago for Employee Ownership Month right before we hit 40 different uses:

Many different names were proposed by SEPeers for our new mascot. Owlivia, Hooper, and Essie to name a few… but after the final vote the official name of Hexter was the winner (pronounced like Dexter). SEP has always used Hexagons as a brand element, so Hexter makes sense! The hex feather pattern on Hexter’s chest is also an important feature that helps differentiate Hexter from any other owl. That and the Batman ears.

Some of the first uses of Hexter involved having Hexter in flight. Thus, flying Hexter was born. The wings were designed to be slightly reminiscent of the Hylian Crest from the Legend of Zelda series. Many SEPeers are avid gamers and recognized the similarity immediately. People quickly fell in love with Hexter’s charm.

From One Design to Many

Through application, we discovered that Hexter would need different treatments based on various uses. What if Hexter has to be a single color, or on a dark background? After testing, six different Hexter variants came to be the most common. A regular color version, a mono version on light backgrounds, and an inverted mono linear version for dark backgrounds.

Twice a year, SEPeers come together for a weekend of pitches, conceptualization, and making. This has been branded as SEP Makes, and one of Hexter’s first jobs was to help bring some new life and recognition to our hackathon and game jam weekends.

SEP became an official sponsor of GenCon in 2022, so for the occasion a whole adventuring party of Hexters was created. There’s the warrior/fighter Hexter, the rogue/thief Hexter, the cleric/healer Hexter, and even a mage/wizard Hexter.

Throughout the year, Hexter has been used over 40 different ways, from Personal Development to podcasts. You can find Hexter drinking coffee, listening to music, or even going to space as part of our kickball team (The Hooting Stars).

Many SEPeers have also taken it upon themselves to make Hexter into something more. 3D prints of Hexter have been made, both flat and fully dimensional. One SEPeer even crocheted a Hexter! All in all, in one short year Hexter has become loved by SEPeers across the board. Looking forward to seeing what happens in year two!

We love Hexter, and we hope you do, too. Learn more about the creation and story behind of Hexter throughout our blog. 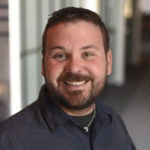