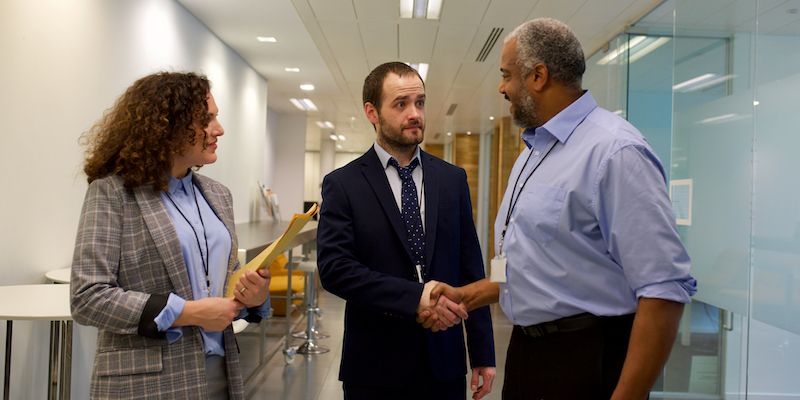 The “Inside Man” is a 12-episode show produced by the training company, KnowBe4.  In a show where everyone is british except one shady, well-dressed, American villain, there is a hacker, hired to steal company secrets. The hacker ends up enjoying his very average job, and his very average co-workers. Hijinks ensue. Lessons are learned.

I sign in to my account. It’s 7:30, and I’m excited to see what happens next to the lovable lead, by the mysterious American villain, in front of the utterly forgettable staff.

Except… It’s 7:30 am, not pm. I’m at work, not on my couch at home. Signing into my laptop, not Netflix. About to watch a security training video, not Sherlock.

How I Train When It’s Mandatory

I, being an extremely average consumer of most things, am an extremely average security trainee. I open up the training slide deck, mute my computer, and press play. I come back to my laptop when I’m prompted to take the obligatory quiz. I may pass on the first try, or I may retake it until I pass, jotting down the correct answers after each iteration.

At some point, training companies got cute. They adopted that old 1990s web design, where your mission was to find all of the clickable objects in a room to learn stuff. Now, remember, I am entirely average at consuming things. So instead of actively engaging with the activity, I rolled my mouse around the screen until the cursor changed from default to a pointer, clicked on the thing, and then resumed as quick as I possibly could. This being progressive training, there weren’t even tests for me to fake my way through (which was great).

But then KnowBe4 did a thing…

And they totally got me! I don’t know when exactly I got attached to the characters or the plot, but boy was I sad when the training session ended. Like – legitimately sad that there wasn’t more. What’s worse, is I accidentally learned a bunch of stuff from it! I caught myself recommending password managers over dinner. Once was so paranoid to leave my laptop in my car, I carried it with me into the grocery store.

All this is to say, the tv-show medium that KnowBe4 uses to share its security vulnerabilities content is sneakily powerful, and genuinely enjoyable. It’s the Sesame Street of the corporate world.