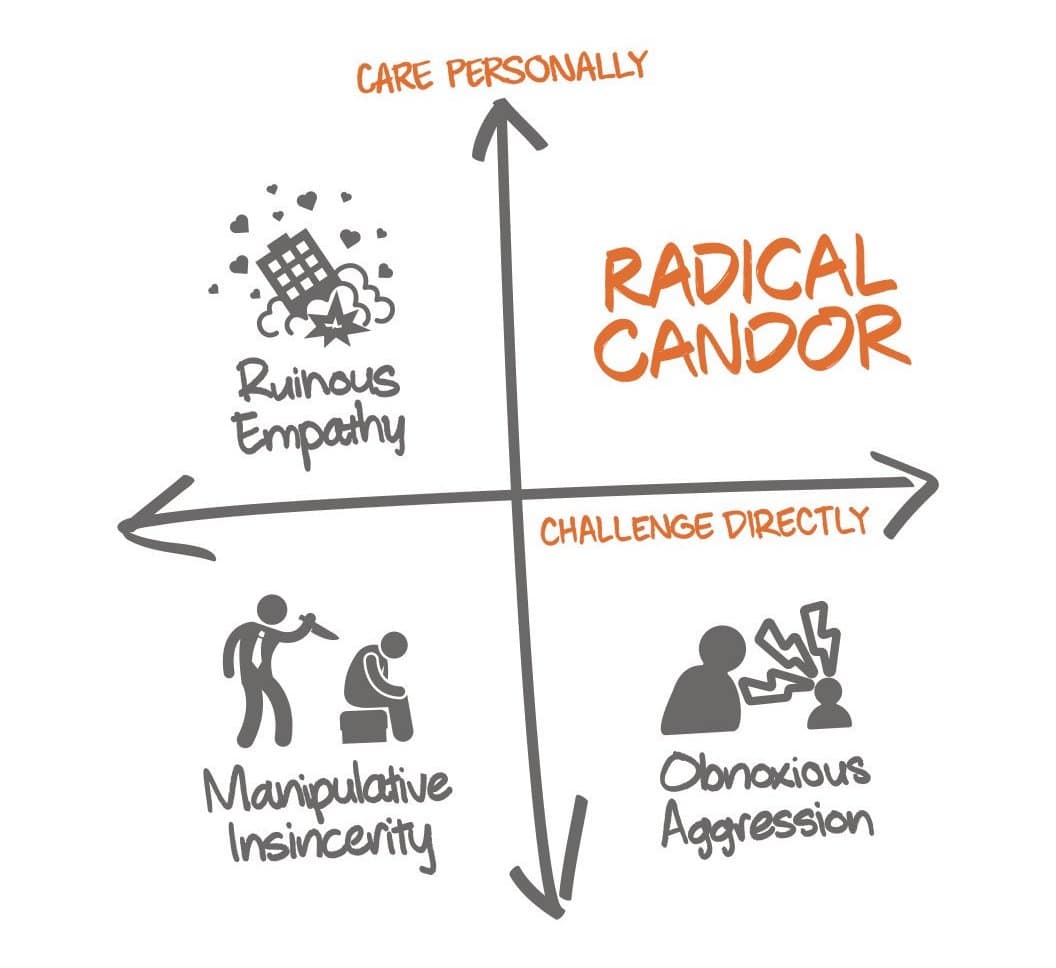 I should also mention that the title should really be “new leads who are terrible at thinking on their feet in front of a crowd need self directed radical candor.” It’s just… not as snappy of a title 😊 So reader, if you’re a new lead who is great at improvising in a conversation, you probably don’t mess up enough to need this post lol.

To be radically candid about yourself, out loud.

As a new lead, I had to figure out my leadership style. In experimenting with leadership styles, I found my favorite brand was a publicly self directed version of Radical Candor. As a new lead, I fumble around quite a bit. I mean, historically, I almost never know the exact right thing to say. I usually leverage a lot of context setting to help my teammates make sense of the word vomit I’m throwing at them.

In the lead role, however, there’s little time for fumbling around. Especially because a lot of the time you’ll be in front of a client. Instead, you have to take your best shot and see how what you said lands. When it lands poorly, this publicly self directed radical candor has saved me from many an uncomfortable moment.

Giuls, what are you even talking about right now…

For me, this meant getting comfy calling myself out on things. Leadership comes a bunch of responsibilities. The workload is – like – begging for something to be forgotten. Owning up to these dropped responsibilities is an important aspect of transparency for the team.

When I did inevitably did drop a ball, challenging myself, I would often say something like this to the team:

You are totally right, I said I was going to email that guy yesterday and I completely forgot. Thanks for the nudge!

When it would have been so easy to say something that didn’t give away a failure. Like a quick, “Yup, I’ll do that today” or even a straight up lie about having already done it but not hearing back yet. Hello manipulative insincerity 🙋‍♀️

I also had to get comfy about calling myself out for my state of mind. I was pairing with a teammate, and I was in the absolute worst mood for absolutely no reason I could point to. Anyway, I recognized the very spicy tone coming out of my mouth and at some point I sat back and said something like:

Girl, I am so sorry I don’t know why I’m in such a crappy mood, but this is not at all about you or what we’re working on. I just need a couple of minutes to unpack this and I can dive back in.

… and our entire dynamic changed. People know what it’s like to come to work in a weird place, and most of the time they’re so much more comfortable when they know it’s not about them. And for me, owning up to it helps to take me out of that very spicy place.

Similarly, the other day I was commiserating with a teammate about a very spicy situation. We were interrupted by a couple of folks who forced a non-spicy context switch. In this new context, I realized I was still mean mugging it and physically stepped away and re-entered the conversation:

Hey guys, I really need to walk back in with a new attitude. One sec!

B.T.W. I totally stole this from Cheer’s Monica Aldama, and reader, would recommend! I’m not sure why the physical reset helps the mental reset so much, but 👏 it 👏 does.

I cannot – for the life of me – care personally towards myself. Reader, I legitimately need to be pregnant and caring for a little monad before I exercise or drink near enough the right amount of water a normal human should consume. Emotional and intellectual care is much the same way for me. Very unnatural, but once I got the hang of it, it put me in a much better place to lead.

Being direct will totally miss the mark if what I’m exposing about my current state doesn’t come from the heart. I would mess this up constantly and slide into the obnoxious aggression quadrant. It usually looks like self-deprecating humor:

Guys, I cannot wait for you all to get a real Lead Software Engineer so you know just how much better life is when you’re lead by someone who knows what they’re doing!

Who… what… what was my team supposed to do with that? It just makes everyone feel weird.

The (self)care personally version of that same statement would have been:

Guys… I know I’m not doing everything I should be I just can’t figure out what it is or how to fix it.

That kind of candor then makes it a team conversation. Either they jump in with “everything’s fine, you need to chill” or maybe there is something missing and now you have 8 other people who can help you figure out what the next step is.

By being so candid, and coming from a place of self care, I was able to increase the amount of accountability in which my team can be involved. For example, if I openly declare that I forgot to approve their stories, I found that it was more likely that a teammate would check in and hold me accountable sooner rather than later.

I found that modeling this behavior gave other people permission to be more honest and candid about themselves. I found the conversations were more real, and so were the relationships.

Challenging my state, doing it out loud for my team, is a way I provide myself feedback that is hard to get from the people I lead. I think that verbal acknowledgement/feedback is what helps shake me out of the spiciness. 🌶

👋 If you try on this idea, feel free to reach out and let me know how it went for you!